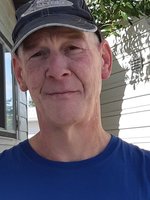 It is with a heavy heart we share news of Robert's sudden passing on March 4th 2020 at 47 years old.

Born in Carrot River, Saskatchewan, he was the second of five children. He had a passion for vehicles, especially his Mopars. If he wasn't found working on his truck, he could be found drinking an ice cold Pilsner. He was a man of simple pleasures such as pulling pranks on unsuspecting family and friends or playing cards. He loved the outdoors and the open country.

He is survived by his two children Clinton and Samantha; his mother Judy; his 4 siblings Cliff (Anita), Angela (Roger), Myrna and Val; his aunt Delma; his uncle Alvin; his cousins and many nieces and nephews.

May he rest in peace.