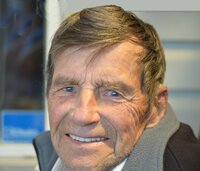 John was born October 5,1933 in the Kelvington/Nut Lake area in Saskatchewan to Arthur James (Jack) and Ellen Leech. He left school to start his career path of farming, carpentry and running his own construction company before moving on to working for various large construction companies in a carpenter, foreman, supervisor, and management roll in Saskatchewan and then in Alberta.

John married Maxine Fern Dean on August 5,1961 in Kelvington and went on to have three children: Todd Michael in 1963, Sandra Fay in 1964 and Trevor Thomas in 1969. John is survived by his 3 children, 7 grandchildren, 10 great grandchildren plus sisters Evelyn, Connie, and Jackie. He was predeceased in death by his wife Maxine Fern, parents, brother Morris and sister Louise.

Our father worked very hard to support his family and household. He made sure that no matter how busy he was, he’d pack up the mini home with us kids and mom to either head out to Fishing Lake by Kelvington or to Montana for shopping trips. But us kids liked the Disneyland trips the best.

After the passing of our mother, Dad slowed down a bit, retired and starting tinkering around while taking care of mom’s garden flowers, tomatoes and potted plants. He also started the hobby of designing and building very intricate wall and shelf clocks until his eyesight got a little tired. Dad followed the Blue Jays very closely and usually called his sister Connie and kids at least once a week to complain about what the Jays did wrong to lose. John will be missed very much by his family, friends, colleagues, and acquaintances that he made over his 88 years.

One of our fathers wishes was a request to have a very small, very private graveside service with his children, grandchildren and great grandchildren. We will be planning a memorial in the future to celebrate John's life for his non-immediate family, friends and colleagues.

God bless you all and the family is very thankful for the camaraderie, compassion and friendship shown to our father over the years and also to his family.