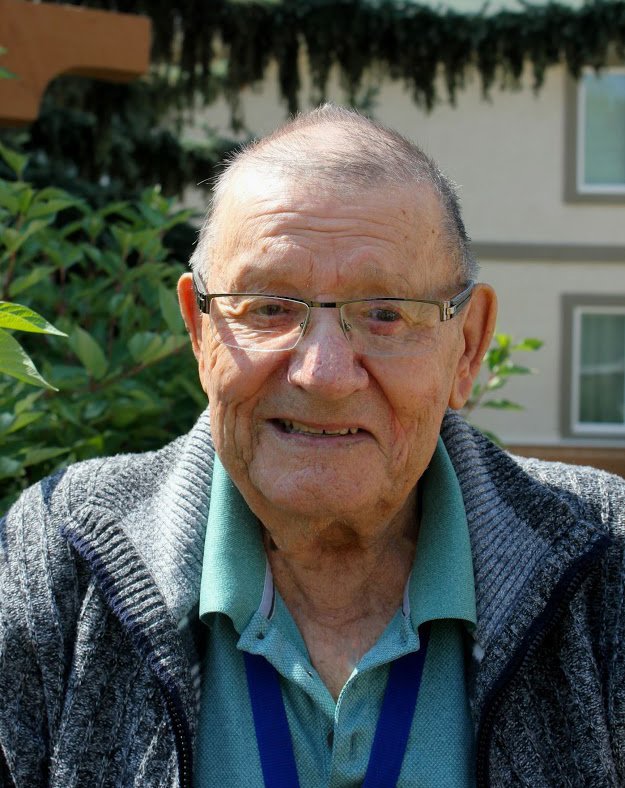 Leo Jules Gauthier was born to Albert and Julia Gauthier in Cluny, Alberta on January 2, 1925. He passed away peacefully with family at his side, on December 29, 2019 at Strathmore Hospital at the age of 94 years.
Left to cherish his memory is his loving wife of over 68 years, Elizabeth Josephine (Betty-Jo) Gauthier (Elias);  six children: Anthony (Sharon), Don (Brenda), Bill (Maggie), Pat (Barb), Rita (Vern), Martin (Glenda); 16 grandchildren; 17 great-grandchildren; sister Angel (Ken) as well as numerous nieces and nephews.
Leo was pre-deceased by his parents, five sisters, Annette, Rosie, Laurette, Lea and Albertine and two brothers, Lawrence and Aime.
Leo bought grain for United Grain growers in Barons, Cluny and Hussar. His love of the farm life lasted his whole life and he always enjoyed seeing how the crops were doing. He was an avid hockey fan even before T.V., starting out as a Leafs fan and switching to the Flames upon their arrival in Calgary. He was very involved with minor hockey, coaching teams in Hussar including the Hussar Hustlers with five of his sons and one nephew playing on the team. In later years he enjoyed watching his grandchildren and great grandchildren play. He always had a big grin for the grand kids and great grand kids.
A prayer vigil will be held on Thursday, January 2, 2020 at Wheatland Funeral Chapel (202 Lakeside Blvd. Strathmore) at 7:00 p.m.  Funeral Mass will be celebrated on Friday, January 3, 2020 at Hope Community Covenant Church (245 Brent Blvd. Strathmore) at 11:00 a.m. Interment to follow at Sacred Heart Cemetery, Strathmore.
In Leo’s memory, memorial donations may be made directly to Strathmore and District Health Foundation (200 Brent Blvd. Strathmore, AB T1P 1J9)

Share Your Memory of
Leo
Upload Your Memory View All Memories
Be the first to upload a memory!