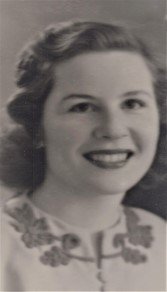 Vera L. Nelson, 98 of Strathmore, granddaughter of Joseph H.S. Moss, daughter of Isaac and Lilian Stinson, loving wife of Norman S. Nelson, passed away at the Sagewood Assisted Living Centre in Strathmore. Prior to her passing, she repeated many times how lucky she was for the marriage she had with Norman and the son’s she was so proud of.  She was predeceased by her sisters Norma Weber and Edna McNeil. She is survived by her two sons, Drewe (Karen) and Dexter (Valerie) of Carseland, AB. She is also survived by five grandchildren and 10 great grandchildren.

Mom grew up in Carseland during the “Dirty Thirties”.  Her father Isaac ran the pool hall and   barber shop and times were tough. She recalls one day when her Dad came home from work and pulled out both front pants pockets and they were empty. It is fair to say this experience left an indelible mark on her and most people who lived or grew up during this time.

Being the granddaughter of a pioneer (Joseph H.S. Moss), Mom also took great pride in being a member of the Southern Alberta Pioneers and Their Descendants Association. She was a Gold Card member for many years and enjoyed attending the Annual Roundup at the Palliser Hotel every fall.  In recognition of her passing the family will be making a donation to the SAP Foundation.

Mom attended Normal School in Calgary where she earned her teaching certificate.  Teaching elementary school at Playfair, Carseland and later in Calgary was a large part of her life. I might add that she was very good at it.  Many of her former students comment to this day on the good start in school they received from her. She married Norman S. Nelson, son of Sam and Helene (Lausen) Nelson and enjoyed life on the Nelson farm a mile east of Carseland.  Drewe was born in 1945 and Dexter in 1949.

She also treasured the winter holidays that she, Norman and the boys would spend in Long Beach, California.  After school was out in the fall, we would drive to Rio Vista, California where we would visit Norman’s sister Beaulah, her husband Fred Hill and daughters Pat and Nancy.  We would then drive to Long Beach and spend two months at the “Venetian Square” (hotel and apartments).  Mom would home school us at a time when permission to home school your children was a rarity.

Like Norman, she enjoyed spirited conversations and debates generally focusing on religion and/or politics and she could become rather philosophical at times.  Vera instilled a sense of value and ambition in both Drewe and Dexter.  She took great pride in their accomplishments, both at work and with their families.

She and Norman treasured their grandchildren (Stephanie, Cameron, Chris, Corrie and Lindsey) plus 10 great grandchildren. Grandpa and Grandma liked nothing better than to get in their motorhome and go camping with the grand kids.

After Norman’s passing in 2000, Mom lived on her own in a condo in Strathmore until moving to the Wheatland Senior’s Lodge and then to Sagewood. She loved crocheting, watching curling, and spending time with her children, grandchildren and great grandchildren. She will be greatly missed by her family and friends.

The family would like to thank the staff on Dawson Lake, Sagewood Age Care for the excellent care, kindness and consideration shown to Vera during her stay. It was greatly appreciated.

Share Your Memory of
Vera
Upload Your Memory View All Memories
Be the first to upload a memory!