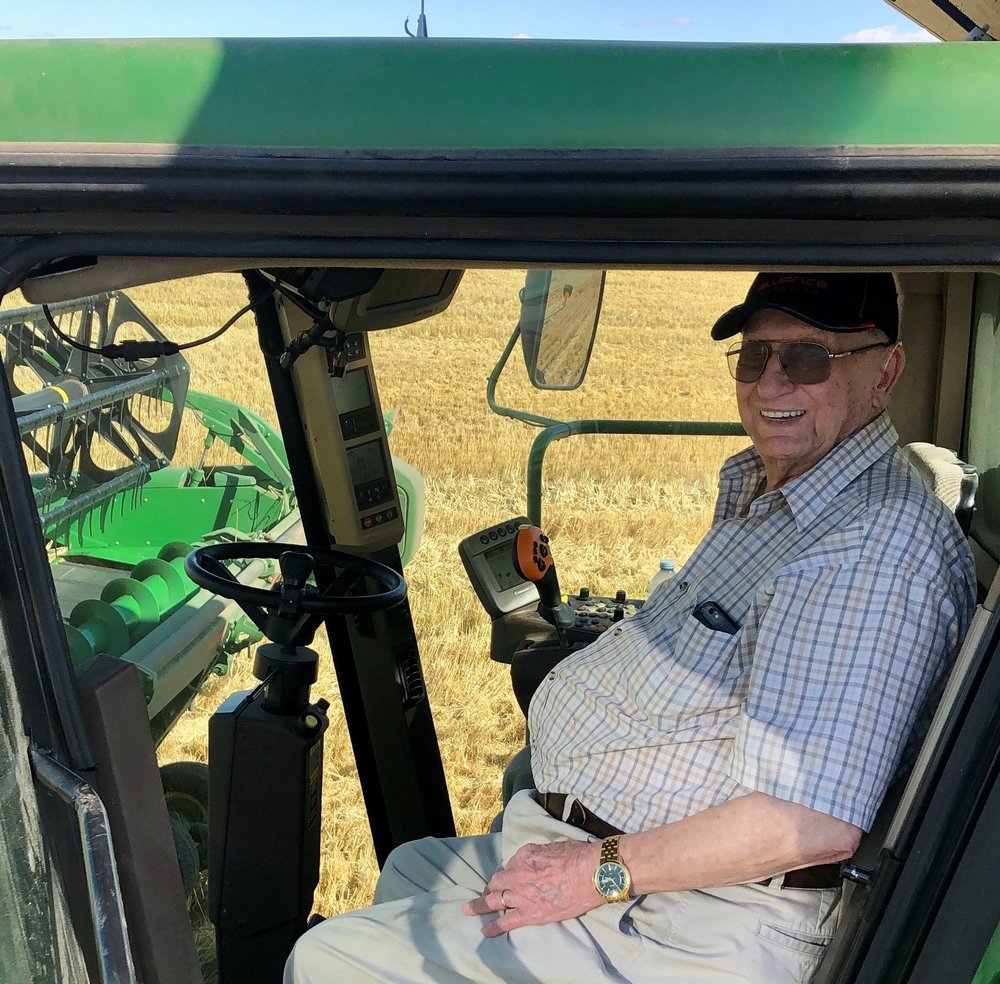 Harry Luke Muller of Hussar, AB peacefully passed away in Strathmore on April 16, 2020. Harry leaves behind his beloved wife Eileen of 70 years.

Harry was born May 11, 1928 in the back of a car on the way to Bassano Hospital. As an only child he grew up on the current location of Muller Farms, which is southwest of Hussar on the Crowfoot Creek. His childhood education concluded in 1944, which took him from Meadowgrass School to Cluny where he met his future wife Eileen. He then attended an Agriculture course at Olds College as well as completed a mechanical course at SAIT.

Harry married Eileen (Bennett) of Gleichen, AB on November 5, 1949 and they took over the farm when his father (Fred Muller) passed away in 1950. Harry was also predeceased by his Mother, Elizabeth Muller of Calgary, AB in 1989.

Like most old timers in those days, farming was difficult and they worked hard. In the mid 1950’s Harry and Eileen finally had power and were able to establish some infrastructure. It was a mixed farm up until the late 1950’s when they committed to being solely a grain farm growing Wheat, Barley, Canola, and Flax.

In 1962 Harry and Eileen built a new home on the farm and over the next 4 years they welcomed 3 children, Dean, Glenn And Carol.

Harry was extremely involved in the Hussar community. He was a part of the Hussar Credit Union Board, The Bow Valley Propane Coop, Hussar Sundowners Club, Municipal Planning Board for the County of Wheatland, Director with the Hussar Fire Association, and the Alberta Surface Rights Board. Harry was also a commemorated active Hussar Lions Club member for over 50 years.

Harry and Eileen retired from the farm in 1995 and moved to Strathmore and then later moved to the Wheatland Seniors Lodge in 2018.

Harry enjoyed the simple pleasures of life, which included his love of his wife and family, neighbours and community. He was always happiest during busy times on the farm and he incredibly completed 76 harvests there. His eternal love of farming continued to this day and his legacy carries on in all his children and grandchild.

At this time, the celebration of Life for Harry Muller will be postponed to a later date. In lieu of any flowers or cards donations can be made to The Hussar Sundowners Centre.

Share Your Memory of
Harry
Upload Your Memory View All Memories
Be the first to upload a memory!