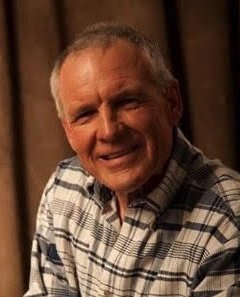 It is with great sadness that the family and friends of Jean-François Portail, better known as John Portail, announce his passing after a long illness, on Saturday, May 16, 2020, at the age of 74 years.

John will be sadly missed by his dear and close friends Rozella Pietz and Chris Dillman, and the other members of the musical group - Rozella & Friends, who enriched his life for many years.

He did his High School partly in Alberta at Chestermere High School and then in BC, at Lord Tweedsmuir High School, later on he attended the University of British Columbia, from which he graduated with a degree in Agriculture and Economics.

John then returned to Alberta, world of horses and cattle that he learned to love so much from his Mom, and established himself in Strathmore. He occupied the position of District Agriculturist in various parts of Alberta. His favorite hobby at that point was rodeos, bronc riding especially, which he had already practiced on his parents’ farm in North Africa. Later on he became a rodeo judge.

After his retirement, he taught himself to play the guitar and joined the musical group ROZELLA AND FRIENDS and soon took great pleasure playing with this group of friends in Retirement Homes, and singing Country and Old Time songs. We wish to extend our gratitude to the wonderful musicians of this musical group who gave John their attentiveness and loving care.

A Celebration of John’s life will hopefully be held in Alberta this coming summer, once the COVID-19 restrictions are lifted. We will make sure to advise all of his friends….

With much Love from all …..

Share Your Memory of
John
Upload Your Memory View All Memories
Be the first to upload a memory!