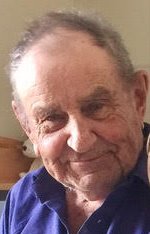 Obituary of William Matthew May

William Matthew “Bill” May passed away on January 11, 2021 from COVID-19. He was predeceased by his wife, Jean (Kermack); companion, Betty Fortier and children, Lori May and Doug May.

Bill was born April 16, 1926 in Strathmore to Matthew and Nellie May. He enlisted in the army in 1944, then joined the CPR working alongside horses raking hay. From there, he worked in mechanics and milk delivery before settling in as a grader operator for the next 32 years. Until his health prevented him, he was an avid curler and golfer. He spoke fondly of travelling Canada with Jean, and later Betty. Many recall the silly musical horn he attached to their motorhome, his expert BBQ skills, a cap for every occasion, and his infamous exclamations “is that right!” and “son of a gun!”. In his later years, Bill could be found having his morning coffee at the local dealership (he was never without the latest vehicle), and lunches at Smiley’s.

In light of current community restrictiions, a service will be held at a later date.