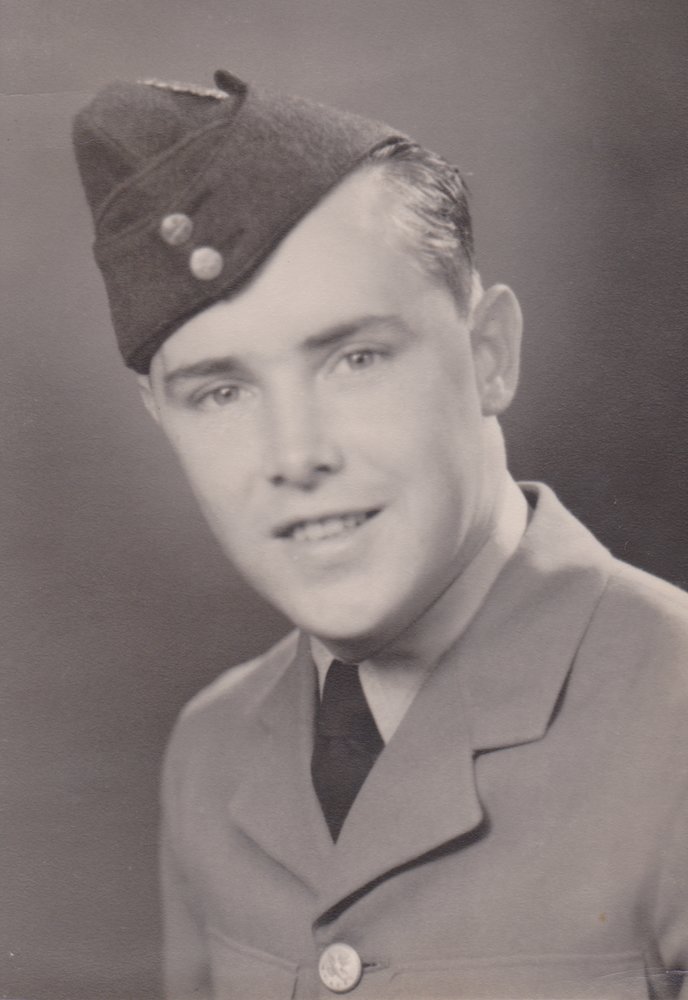 Sergeant Elwood (Andy) Anderson was our hero. He fought the good fight for 90 years, having his best friend, our mother, at his side for more than 65 of those years. As is with most heroes, he simply tried his best! In our eyes he was incredible, almost invincible and we were truly proud of him. So, it is with great sadness that we must notify both family and friends of our father’s passing. Elwood is survived by his seven children, Jane (Barry) of Duncan BC, Cindy (Graham) of Moose Jaw SK, Trent (Susie) of Townsville AU, Kevin (Jo-Anne Landine) of Comox BC, Cheryl (Kirby – deceased) of Moose Jaw SK, Derrick of Olds AB, Kimberley of Calgary AB; eleven grandchildren and six great grandchildren; numerous nieces and nephews; sister-in-law, Gladys Doud of Maxim SK;as well as a large extended family and many close friends. He was predeceased by his parents,Salder and Vera Anderson, his sister, Betty (Bob – not deceased), and his two brothers, Jimmy (Willa – not deceased), and Raymond (Norma – not deceased).

Dad was born in Ceylon, Saskatchewan in 1930 into a farming family, a mother (nee McNaught) from Ontario and a father who hailed from Wisconsin. He began his life at the beginning of the Dirty Thirties and like most children, adapted to his environment, never really understanding that he was poor. A positive attitude, belief in oneself and a plan in your back pocket was all that was needed for a successful life. Unfortunately, he lost his father from tuberculosis at a very young age, so he, his mom and three siblings worked hard to make the most of a tough prairie life.

Dad joined the Air Force in early 1951 and trained as a fitter (aero engine technician) in Ontario. In 1952, dad was serving in Grostenquin, France with 430 Squadron; where he worked on the new Canadian built F – 86 Sabre. Also, at this time, mom and dad had decided they were going to get married. The following year mom made the big transatlantic flight from Regina, to Glasgow, Scotland, and the two were soon married in North Luffenham, England on November 14, 1953. They travelled extensively throughout Europe during dad’s tour of duty, returning to Canada in 1955.  Once home, dad took his release from the Air Force and put his entrepreneurial skills to use for a few years.

Our parents at this time had a growing family of three children and one more on the way. Dad re-enlisted in 1958 after working at Currie Barracks in Calgary with the Lord Strathcona’s Horse. Happy to be back in the Air Force, the family found themselves at RCAF Base Greenwood, Nova Scotia. Dad was assigned to 404 Squadron, working on both the Neptune and the new Canadair CP – 107 (Sub Searching) Argus. In 1965 we were transferred to RCAF Base Comox, where dad would spend another 10 years servicing and flying on his beloved Argus aircraft. He was now with the 407 Maritime Patrol Squadron. In 1966, our parents had their last child, making us a family of nine. Our parents being stubble jumpers from Saskatchewan, decided it would be a valuable experience for their seven children to grow up in a similar setting, and soon bought a small farm on Little River Road, in the Comox Valley.

In 1975 we were again transferred, this time to CFB Moose Jaw, Saskatchewan. During his time in Moose Jaw, dad helped resolve the problem of buckling tailpipes in the CT – 114 Tutor jet trainers, designing and building tools to easily align the tailpipe in the aft section of this plane.

Our father is a time capsule, at one point parading in front of Princess Elizabeth before she became the Queen of England, and also Air Marshal Billy Bishop during his training at Camp Borden, Ontario. In addition, he had the opportunity to head up the first ground crew for the RCAF Sky Lancers Aerobatic Display Team in Grostenquin, France. So, we have all lost another link to our history with his passing. Our father always said he was lucky in life, but he was also not one to stand around waiting for life’s riches to fall into his lap. He was a husband, father and teacher, who instilled the value of a dollar into all of us. Our dad has gone AWOL … and his children have lovingly dropped all charges! We know you and mom are together and will continue to watch over us. We miss you and love you both! X0X0 Jane, Cindy, Trent, Kevin, Cheryl, Derrick and Kimberley

The family would like to thank all the hardworking Strathmore Hospital staff for the care and love shown to our father during his short stay. The thoughtful words shared at end of life by Dr. Bernhardt were very much appreciated. Our father will be peacefully laid to rest beside our mother in Maxim, Saskatchewan.

Share Your Memory of
Lawrence
Upload Your Memory View All Memories
Be the first to upload a memory!
Share A Memory