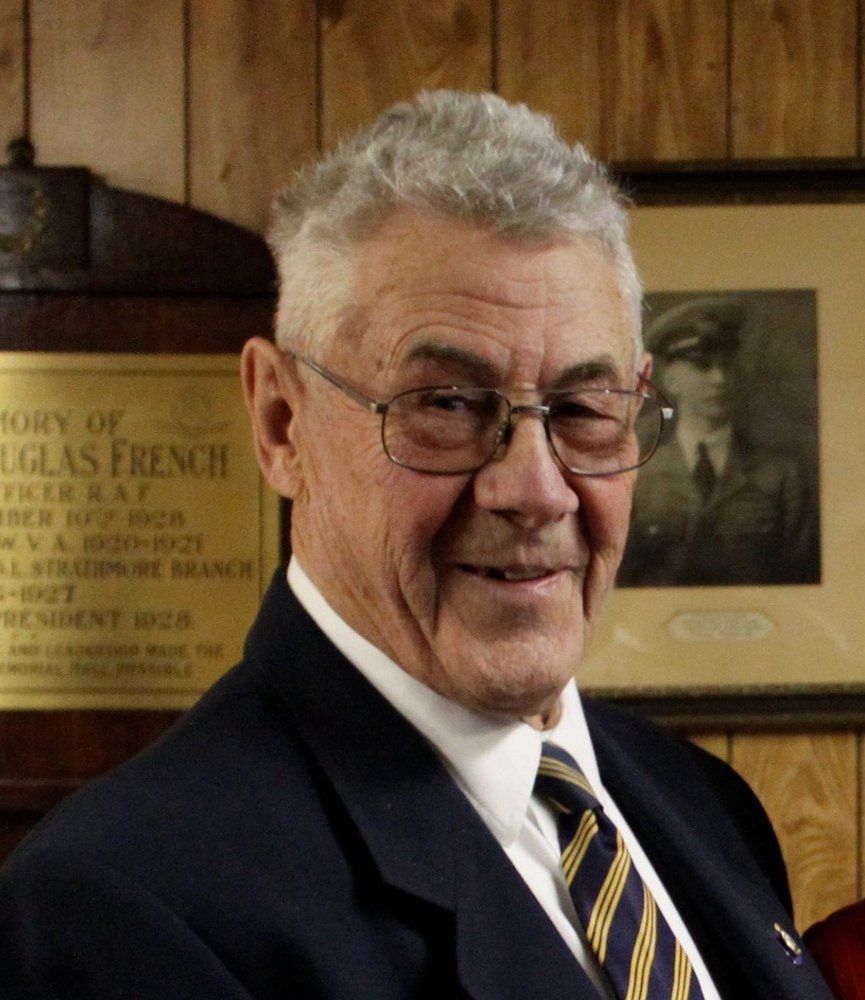 On a bright Alberta blue-sky winter day and surrounded by his family’s love, John Scheer passed away peacefully on Monday, February 8, 2021 at the age of 94. John will be remembered and dearly missed by his family, as loving husband and best friend to his wife of 58 years, Ann, as the best Dad ever to his daughters Nancy (Norm), Jill (Brad), Beth (Rod) and Becky (Gord), and cherished Grandpa to Carter (Morgan), McKenzie, Hayley, Jenna (Graydon), Jack, Bennett and Megan. John will also be deeply missed by his extended family members and his many dear friends.

John attended primary school at the Elwood School, then Junior High at Crowfoot School and in 1946 he completed High School in Cluny.

As a young man, John, and his father, Harold, raised cattle and grain-farmed together on land east of Strathmore that was originally homesteaded by his grandfather in 1909. In 1947, John began first renting and then purchasing farmland of his own. He would continue to live and work on the family homestead for 76 years until retiring in 2003 and moving into Strathmore with Ann.

In 1946, John joined the Strathmore Lions Club, remaining a member for 26 years. Through sponsorship of his Uncle Norman, John joined the Strathmore Masonic Lodge #53 in May 1952. He remained a member for over 60 years. He sang tenor in the Strathmore United Church choir and joined youth groups which put on musical comedy shows. He was athletic and played baseball, tennis, hockey, and badminton. These interests lasted a lifetime as he continued to enjoy many sports, sing in choirs and act in community musicals and plays well into his later years.

In 1953, he became a Reservist with the Light Anti-Aircraft Battery, later the South Alberta Light Horse Unit, and undertook Officer training with the King’s Own Calgary Regiment receiving his commission as Lieutenant in 1962. He joined the Strathmore Royal Canadian Legion #10 in 1972. For over 36 years, he and his friend George Freeman delivered Remembrance Day services at many local schools. He was honoured to be awarded by the Legion with Life Membership and the Palm Leaf Meritorious Service medal.

In 1981 he became a United Farmers of Alberta delegate and then a director in 1989. In addition, he was a member of the Alberta Wheat Pool, Unifarm, and the Strathmore Rural Firefighters.

Family and friends were very important to John, as was serving this community that he was proud to call home for his entire life. His sense of humour was renowned and he loved a good joke or prank, bringing a sparkle to his blue eyes every time he expertly delivered his trademark one-line zingers. John will be lovingly remembered for his kindness and generosity, his teasing spirit, and his great love for the wide Alberta prairie land that was his home.

John’s family sincerely thanks the staff at Wheatland Lodge, Whitehorn Village, AgeCare Sagewood, and the Strathmore Hospital for their compassionate care through his final years. We also extend our deep gratitude to Dr. Senzani for always giving John so much of his time and kindness.

Due to current restrictions on gatherings, John’s service will be private with immediate family. We hope to host a celebration of John’s life when gatherings are permitted that will allow any and all family and friends to properly raise a toast together to our fun-loving guy. In lieu of flowers, we invite you to make a donation to the Wheatland Hospice Society and their work to create a much-needed hospice for our community, a cause that John often personally supported. (www.wheatlandhospice.ca).

To watch the live stream of John's service, click here.