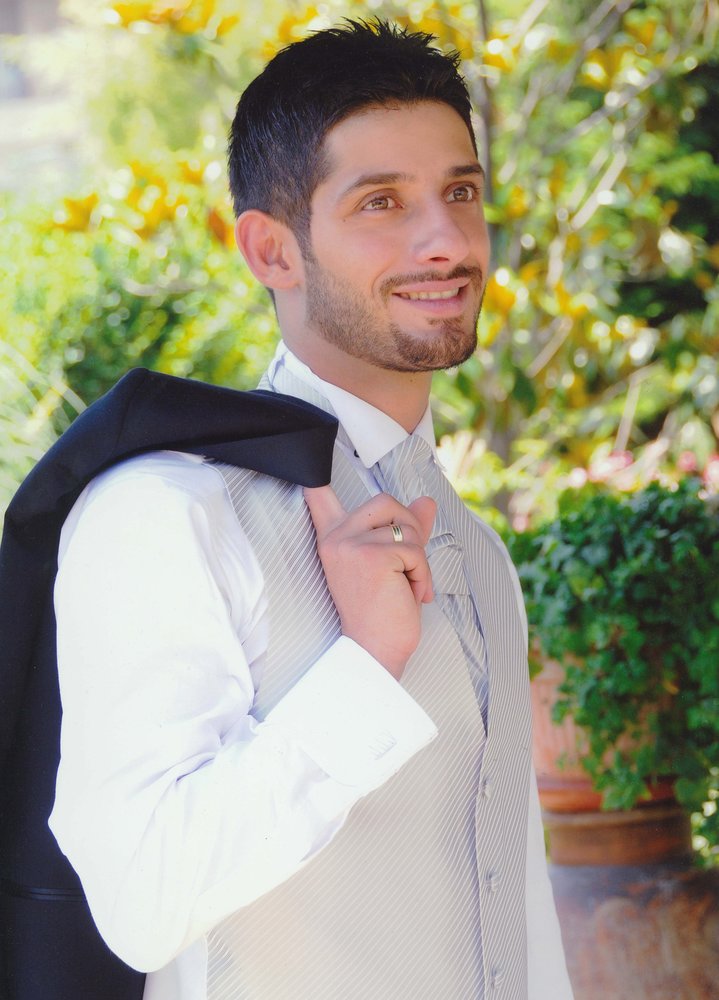 It is of utmost sadness that we announce the passing of Moktar Mitchell Alame. After a ten month battle with lung cancer, our warrior fought until his last breath. He is survived by his devoted wife Faten Monzer 31, two daughters Talia Grace 7, Aya Isabelle 5 and only son Amine Adam 3, loving parents Amine and Mona, siblings Rima, Darine, Tania, and Richard.

From Lebanese heritage, born in Slave Lake on May 4,1985 and raised in Strathmore, he grew up as a small town boy. Mitch embraced simple living and loved rural life. He fell in love with being on the farm, hunting, fishing, camping, golfing, horseback riding, trips to the mountains, boxing and enjoying the outdoors. Mitch also played hockey and his teammates described him as the only goalie who got better with the more beers that he had.

Mitch had a passion for working with his hands and spent many years of his life learning several trades. As a Driller on the rigs, roofer, cook and framer his ambitions weren’t fulfilled. His lifelong dream was to become an engineer. Even with the pressures of Covid, working a full time job and being a father of three, he managed to complete his diploma and graduate as a Power Engineer. When he set his eyes on something he was a bull chasing red and never lost sight. Nothing stopped Mitch from achieving his ambitions.

Mitch was like a Swiss army knife, he was versatile, reliable, useful and could get any task done. Even in his weakest moments he supported those he loved. He continued to help his parents at Smiley’s Restaurant, assist friends in projects, host family gatherings and was a snow angel on the coldest of days.

Mitch lived every moment to the fullest, he worked hard and played harder. He took the biggest risks to feel the thrill, he found the humour in every moment and would put people in their place when they needed to hear the truth. Mitch was a man who took great pride in being the backbone for his family and supporting his friends.

In 2011, he met the love of his life Faten “Batta” Monzer and in 2013 they married. Despite their cultural differences the two weathered the darkest of storms. They loved each other selflessly and prioritized family. While isolated in the hospital for over a month, Faten was his only permitted visitor. They built a connection like no other and during his final waking hours he called for Batta to not leave his bedside.

Daddy will be terribly missed by his three children who think of him now as their guardian Angel. The biggest heartbreak is that he won't be able to give them the life he wanted or teach them the skills he acquired. His bedtime routine “I Heart You, I Love You” will be resumed and his stories will be shared to honor his memory.

Mitch was a survivor and never shied away from a battle, especially not his fight against cancer. Our warrior would bravely say "Don't worry about me, my shoulders are broad and I'm going to be OK". Mitch always gave 200% but eight days after his 36th birthday, he took his last breath. Surrounded by his loved ones he left us peacefully after hearing the voices of his beloved children wishing him adieu.

In lieu of flowers, please donate to the Go Fund Me account to “Help Support Mitchell’s Family.” https://gofund.me/10672a96

To view a live stream of the service, please CLICK HERE. The video will go live approximately 15 minutes prior to the service.

Share Your Memory of
Mitchell
Upload Your Memory View All Memories
Be the first to upload a memory!
Share A Memory