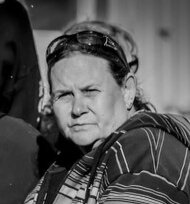 Jane was born November 20, 1957, to Helen and Bill Radiff in Calgary, AB. She was raised in Parkdale and attended high school in Bowness. It was there, after she graduated, that she met the man she would marry, Lorne Pollo. Married on November 3,1979 the pair would move out of the city to try the country life. They settled in the Strathmore area and had 2 kids Jason first then 3 years later they completed the family with Miranda. Jane loved being a wife and mom. She was very involved with her kids, from taking her then to sports or 4H to Miranda’s high school rodeos, Jane was always on the go. Once the kids got older, she took a job at UFA and then moved on to Rona. She loved her co- workers and interacting with the customers. She was also dedicated to volunteering at the Strathmore rodeo for more than 25 years. Jane loved life and touched the heart of anyone she met. She was more than a mom to Jason and Miranda she was a second mom to many others. She loved being a mom and a wife. The only thing she may have loved more was being a grandma to Molly. September 5, 2021, Jane was taken from this world. She was predeceased by her parents in 2012. She is survived by her husband of almost 42 years Lorne; son Jason; daughter Miranda (Mason); granddaughter Molly; and many others who became family over the years. She was a mom and grandma to all, and she will be missed.

In lieu of flowers, donations may be made directly to S.T.A.R.S. Air Ambulance (online at stars.ca)

Share Your Memory of
Jane
Upload Your Memory View All Memories
Be the first to upload a memory!
Share A Memory