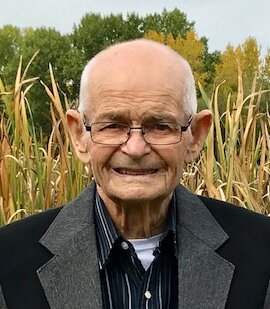 It is with sadness that we announce the passing of Bill Hermanson at the age of 91.  Bill was born September 6, 1930, in Medicine Hat, Alberta and passed away in Strathmore, Alberta on February 26, 2022.  He was predeceased by his daughter, Debbie; parents, Angela and Ole; siblings, Patricia (David Collyer) and Edward (Ella).  He is survived by his dear wife of 65 years, Vera; brother Cliff (Bev); his children: Alvin (Alanna); Debbie’s husband Blaine (Yvonne); Karen (Chris); Jim (Barbara); Frances (Scot); and Joe (Shannon).  Grandpa Bill (Pa) will be missed by his 15 grandchildren: Brittany, Russell (Mel), Kay-Cee (Travis), Gregory (Emily), Todd, Kaitlin (Dan), Carrie (Jason), Judy (Jeff), Nicole (Tyler), Callie, Brandon, Marli, Morgan, Joanne (Eric), and Bruce.  Grandpa Bill also had 12 great grandchildren: Drake, Levi, Shane, Lincoln, Leo, Leah, Cole, Brody, Peyton, Kaylee, Michelle, and Hudson. Bill also leaves behind Auntie Mardelle, cousins, nieces and nephews, and dear friends such as Ken and Bonnie and Marge and Jacob.  He will also be sadly missed by his dog, Sophie, who always was on his lap or snuggled in his vest.  Bill lived in the Jenner area until age 5 and then the family moved to Strathmore. Bill was an extremely hard worker and farmed in the Strathmore area all his life. He had grain, hay, beef cattle, milk cows, pigs, chickens, turkeys, ducks, horses, and dogs and cats. Bill could build or fix anything and was always helping his friends and neighbors.  He helped build the old red barn on the farm which is still standing today to honor him.  He restored an old 1926 Model T car which he loved to drive and it is still running today.  When he retired and moved into Strathmore, Bill and Vera did some travelling to Disneyland, Hawaii, Chicago, a road trip (Pacific to Atlantic oceans) completely across Canada, a tour bus trip throughout NW USA, and a cruise to Alaska.  He also made many family trips to Manitoba and BC.  No funeral will be held, the family will honour his life through a private service.  In lieu of flowers, donations may be made directly to the Strathmore District Health Foundation (200 Brent Blvd, Strathmore, AB  T1P 1J9  Attn:  Mardelle Bazant).