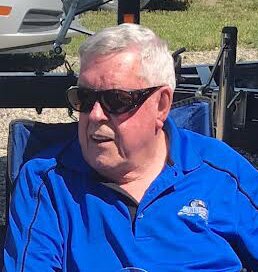 With deep sadness, the family of Tom Blakney announce his sudden passing on March 5, 2022

Tom had been battling aggressive skin cancer for a few years, which was very painful, and required constant procedures and surgeries. The pain was unbearable and contributed to his death. Tom never complained as he did what he thought was necessary to live, while displaying toughness and courage.

He returned home to Moncton after a couple of years, and then decided to head west.

Tom arrived in Calgary in 1960 ready to go to work.

Soon, Tom met Shirley and they were married in Nov, 1962 in Calgary.

Tom worked in the automotive parts supply industry and eventually became a shareholder with Action Parts in the early 1970’s.

In the fall of 1975, Tom, Shirley, and the boys, moved outside the city to the small farming town, named Strathmore.

Tom started his own business in the summer of 1976, Big “S” Automotive Parts Ltd.

As the family grew, so did the business. Tom and family worked very hard to establish a successful business and were also very active in the community.

Tom was a charter member of the Kinsmen Club of Strathmore and was a member of other service clubs.

Tom and Shirley loved to socialize with many of their wonderful friends and neighbors in the community. Strathmore was home. This is where Tom and Shirley raised their family, enjoyed their grandchildren, established lifetime friendships, and enjoyed life.

Tom and Shirley traveled to many places with family and friends. Tom and Shirley and family especially enjoyed the lake cottage out in the Shuswap region of B.C.

Tom enjoyed a project. Work was a hobby for Tom. He established many great relationships with people in the parts industry, who became good friends.

Tom had another hobby, golf. He enjoyed many great rounds at the Strathmore Golf Club, and courses all over Canada and the U.S. with his regular group of friends.

Tom sold his business in 2011 and entered into semi retirement. Tom enjoyed staying busy by helping his son, Todd, in his business, Muscle Motors Ltd.

Tom accomplished so much in his life. He worked hard and helped many people along the way, while taking care of his family every day.

Mourning his passing are his wife of 59 years, Shirley, his Son’s Todd (Audra), Tommy, and Tyrone. The Grandchildren, Teneal, Logan, Ryley, Emmett, and Fergal, Great Granddaughter, Chloe. Brothers, Russ, Richard, and Danny. Sister Nancy. In addition to many inlaws from the McDonald, Blakney, and Zaba families.

Tom was predeceased by his parents Joseph and Nellie, his brothers, Sam, and Guy, his Son, Tim, his grandson, Joel, along with other inlaws from the McDonald, Blakney, and Zaba families.

Please join with the family, in a celebration of life, for Tom Blakney, to be held at the Royal Canadian Legion, Branch no. 10 in Strathmore on Saturday March 12th, at 1:00 pm until 4:30 pm. Food will be provided. All who have known Tom and want to participate are welcome.

Share Your Memory of
Thomas
Upload Your Memory View All Memories
Be the first to upload a memory!
Share A Memory