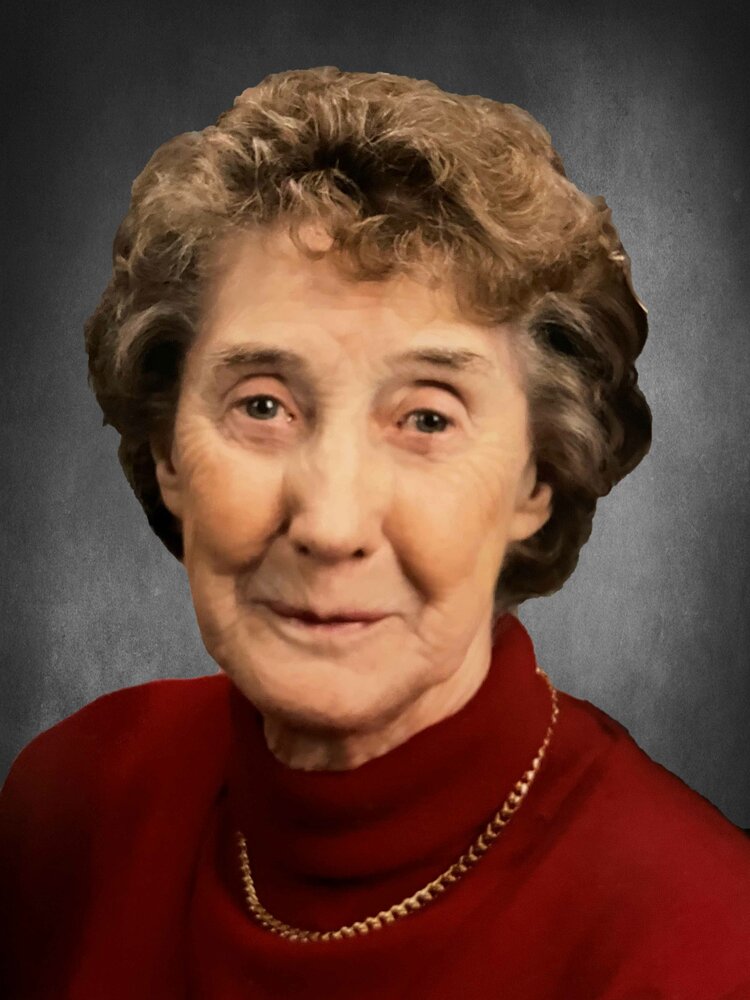 Alva Jean Beckman, known as Jean, quietly passed away at the Sagewood care facility in Strathmore on March 22, 2022 with the love and support of her beloved husband Lee. Jean was born November 17, 1934 as the youngest child of Edna and Walter Beckman at Czar, Alberta. Jean spent most of her childhood on the farm outside of Czar until she was in grade ten when the family moved into town. During school Jean enjoyed sports, track and field (especially high jump), basketball and softball – although she would admit to not being a very good soft ball player with two black eyes from taking a ball to the nose to prove it. After high school Jean tried living in the big city of Edmonton but after a short time decided small town life was for her so she moved to Provost for 3 years and then to Red Deer.  The move to Red Deer was an auspicious one as that is where she met the love of her life, Leroy Quinton, a young air force man stationed at CFB Penhold. Their relationship survived a first date which involved a car accident where Jean ended up with a broken arm. After that, and after Lee survived meeting his future brother-in-law, his 5 future sisters-in-law, and their husbands, Jean and Lee were married on August 9, 1957 in the Czar Lutheran church. They spent the next nine years in Winnipeg, Manitoba where they welcomed their heart baby, Sharon Gail on May 12, 1962. They then welcomed their second daughter, Patricia Lynn on July 12, 1965. In 1966 the happy family moved to CFB Moose Jaw in Saskatchewan where they welcomed a bouncing baby boy, Robert Lee, on December 10, 1971.  From there the family moved to CFB Edmonton (Lancaster Park) and in 1978 they moved out to Gibbons, AB. In Gibbons, Jean enjoyed the atmosphere and community of small-town life. She worked at the senior’s lodge and for Home Care taking care of elderly neighbours in the community. Jean was an active volunteer for many organizations including the one dearest to her heart, the Food Bank. In 1987 she was named Citizen of the Year for the Town of Gibbons in recognition of her many contributions to the community. She was always one of the first to put up her hand to help her friends and neighbours. In 1989 Jean and Lee moved into Edmonton where she continued working for Home Care and volunteering at the Food Bank. In 1997, after their children had left the Edmonton area, Jean and Lee moved to Strathmore to enjoy being close to their children and return to small-town life. While in Strathmore Jean continued to be active with the Food Bank and with the church. Jean had a knack for talking to people and getting to know their life story in a short amount of time.

Jean and Lee enjoyed the trips they were able to take together, including the big trips of travelling to Newfoundland twice, Hawaii twice, a cruise to Alaska and a cruise through the Panama Canal, as well as the smaller trips camping, going to BC and travelling back to Czar to visit family and friends. Jean loved going to the lakes around Edmonton, riding in the boat, and watching the family waterski – even though she could not swim! In later years, after they moved to Strathmore, Jean and Lee enjoyed many trips to Rosen Lake in BC where they spent time with the kids (Sharon (Brett), Patricia (David), and Rob (Nicole)) and grandkids. Of all the things Jean enjoyed, her most loved times were spending time with Lee, her children, and her beloved grandchildren: Devin (Amanda), Colton, Jeffrey, Erin, Alyssa, and Madison.

Jean was loved immensely and will be tremendously missed by her husband, children, sons and daughter in law, her grandchildren, her sister June Bulmer, her sisters-in-law Peggy, Marilyn, Shirley, her brother-in-law Glen, the families of her brother, sisters, sisters-in-law and brothers-in-law, as well as many, many friends. To Jean, it did not matter how remote the blood connection, or even if there was one, everyone was at least a cousin and welcome. Jean was predeceased by her parents, Walter and Edna, her brother Robert Beckman, sisters Olivia Herron, Alice Buettner, Helen Coffey, Evelyn Leighton, Lillian Richards, brother-in-law Melvin Hunter and their spouses. Jean will be remembered with love by all who knew her.

A heart felt thank you and appreciation goes out to Dr. Abercrombie and staff at Sagewood care facility in Strathmore who cared for Jean over the last months. A Funeral Service will be held on Friday, March 25, 2022 at Lord of All Lutheran Church at 1:00 p.m. In lieu of flowers, donations may be made directly to the Wheatland County Food Bank

To watch a live stream of Jean's service, click here.

The video will go live approximately 10 minutes prior to the service.

Share Your Memory of
Jean
Upload Your Memory View All Memories
Be the first to upload a memory!
Share A Memory