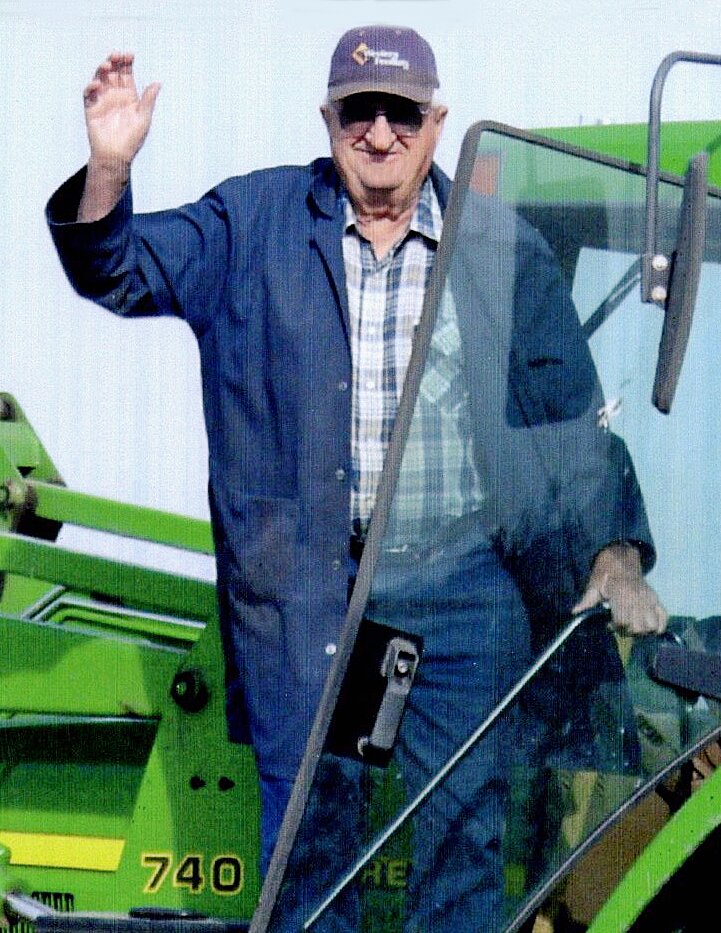 Get Directions
Wednesday
11
May

George Emil Van Verdegem was born to parents Emil and Martha Van Verdegem on February 25, 1928 at Clivedale, Alberta.  They resided there until 1939 where they moved to the family farm east of Strathmore.  George began working at other farms beginning at the tender age of 11 to help out the family.  He eventually met and married his loving wife Mary (nee Bartelen) on November 21, 1950 and lived on the old Bartelen place until purchasing their own farm, being the old Kearns farm.  They both worked and sacrificed very much to make the farm what it is today.  Diana, their daughter, was born in 1952 with their son Douglas to follow in 1955.  George was very well known and liked by many.  He had a huge work ethic and helped many people in his life.  His greatest enjoyment was combining which he continued to do until almost 93 years of age.
George loved to curl, play cards with friends, enjoyed visiting with his many friends, and enjoyed the odd glass of rum on occasion.  He was very involved in helping to build the prior Catholic church and was a Knights of Columbus member for many years.
George was predeceased by his parents Martha and Emil, his loving wife Mary, brothers Bill and John (Helen and Mona), his pal and grandson Jonathan, and his sweet great granddaughter Destiny.  He is survived by his daughter Diana (Wyman) Jones along with her children Chris Dugdale (Bev) and their child Cassidy (Matthew), Kevin Dugdale and his son Braiden. His son Douglas (Karen) Van Verdegem with their daughter Krysta (Kyle) step grandson Steven (Janelle) St.Louis and great grandson Grayson.  Also survived by his sister Mary Van Verdegem.
George was a big presence in our lives and our go-to person for advice.  He will be forever loved and missed.

In lieu of flowers, donations can be made in George’s memory directly to the Sacred Heart Church building fund (23 Strathmore Lakes Way, Strathmore, AB T1P 1L7) or the Strathmore Handibus (Box 2533, Strathmore, AB T1P 0H3) which was very important to him as well. (Please include George's name on the cheques).
A Prayer service will be held on Tuesday, May 10, 2022 at Wheatland Funeral Chapel, Strathmore at 7:00 p.m.  Funeral Mass will be celebrated on Wednesday, May 11, 2022 at Hope Community Covenant Church at 1:00 p.m. with interment to follow at Sacred Heart Cemetery, Strathmore.

Share Your Memory of
George
Upload Your Memory View All Memories
Be the first to upload a memory!
Share A Memory