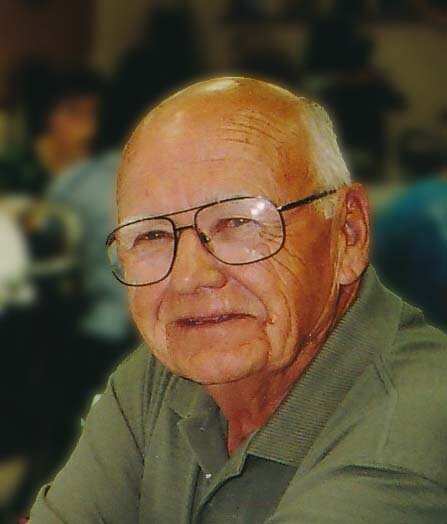 Dad was born in Lawrence, Kansas to Ben Cool and Margaret Walker Cool who were enroute to a winter home in Louisiana. Dad spent his youth wintering in the southern States with his family and the rest of the year between
Carseland and Calgary. He attended SAIT taking ag mechanics and tried his hand at off farm employment but soon decided he was meant to be a farmer. In 1950 he and Grandpa Cool formed J.N. Cool and Company and the third generation took the tiller. A dark-haired city beauty named Mickey Kirkland caught his fancy and they were married in his family’s Calgary home March 7, 1953 moving to the farm in Carseland in time for seeding. Four children were born within five years and thus began the many years of 4H, baseball, hockey and chauffeuring kids and their friends.
In the early eighties Mike gradually assumed operation of the farm. Dad remained keenly interested in discussing and advising on farm practice but as Mom’s health declined, she became his focus. Mom eventually moved to Sagewood
AgeCare Strathmore. Dad was her devoted, attentive caregiver moving to Strathmore himself shortly thereafter. He made sure Mom was never alone and that she was getting the absolutely best care possible.
Dad was a social being with a wide circle of friends and acquaintances. He thoroughly enjoying the company of these friends whether it was the long standing Hillsun gang in Calgary or his many friends in Carseland. He loved jokes, joking, teasing and pranks and had many the co-conspirator!
As a charter member of the Carseland Lions Club he was actively involved in all the club’s activities for many years. He was also a very committed Carseland community association member and, as most rural people do, helped wherever and whenever there was a need.
Dad was athletic and enjoyed playing a number of sports. He played goalie in the Big 6 hockey league out of the Corral in Calgary, baseball in his younger years, took up skiing in his forties and curled in many a local bonspiel. Bird hunting in the fall was a favorite pastime with wild fowl gracing many a winter meal. And his passionate love of golf has been passed onto many of us.
Dad also enjoyed playing cards – Scat after Sunday dinner with the family and Grandma and Grandpa Cool, Gin with his Hillsun golf buddies and Smear with the Carseland card sharks!
Poppa was a great supporter of the grandchildren’s sports. He and Grandma spent many hours in arenas cheering them on, buying 50/50 tickets and donating the winnings back to the team.
He was predeceased by his parents many years ago and more recently by his loving wife Mickey Cool.
Surviving John are his children Gerry Cool (Daryl Gulliver), Lynn (Doug)Thurston, Sandy (Randy) Deeg and Mike (Joan) Cool as well as his sister Margaret Cool (Fred) Kauffman of Denver, Colorado and their family.
Adored grandchildren are Tyler Gulliver (Marcela Herreros), Meghan Gulliver, Brett (Krista) Thurston, Jackie Thurston (Ryan van Asten), Kirk (Jenna) Deeg , Alex Deeg (Joel de Souza), Luc Deeg (Katherine Piesas), Jennifer (Jeremy) Colliton, Rachel Cool (Mark Popel), Matthew Cool.
Worshipped great grands are Anabella, Daniella, Amelia, Deacon and Aeson Herreros Gulliver; Kate and Jessie Thurston; Thea and Tess van Asten; Max and Ellie Deeg; Ben, Jack and Olivia Colliton.
Much appreciation and gratitude are extended to Dr. Young and the staff at Sagewood AgeCare Strathmore. Your care and kindness are truly appreciated.
A celebration of Dad’s life will be held Wednesday August 31, 2022 at Carseland Community Hall at 11:00 a.m.
Donations, if you so choose, may be made in Dad’s name directly to Wheatland and Area Hospice Society (Box 2154 Strathmore, AB T1P 1K2 or www.wheatlandhospice.ca)