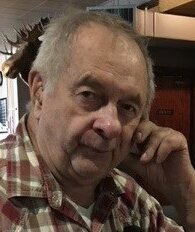 It is with great sadness that we announce Ivan’s sudden passing at home on September 14, 2022.

Ivan grew up in Winnipeg, the eldest of three children (sisters, Marlene, and Elizabeth) and started his love of planes and cars in his very early years.  He could always be found in the garage with his dad, working on many a vehicle. After marrying the love of his life Janet, they hit the road living in Moose Jaw for a few years while Ivan was in the Air Force, then to Calgary for 26 years and finally settled to where Ivan called paradise in 1991 - Rockyford, Alberta.

Shortly after calling Rockyford home, Janet passed away in 1993. Ivan remained in Rockyford, settling in, and making many friends.  Wednesday Wing night at the hotel and Saturday Chinese food with Bert and Marie were a weekly outing (he really missed it during the shutdown).

You could always find him working in the basement, garage, or the airplane hangar he built.  He had projects and vehicles too numerous to mention, but he was in his glory.  He was always telling us how very busy he was working on this car or that car or some type of motorized airplane.

The family would like to thank the Strathmore RCMP for their kindness and Mitch from the Rockyford Hotel who notified the RCMP.

A memorial service will be held at a future date with interment as he requested next to his wife, Janet.

Share Your Memory of
Ivan
Upload Your Memory View All Memories
Be the first to upload a memory!
Share A Memory