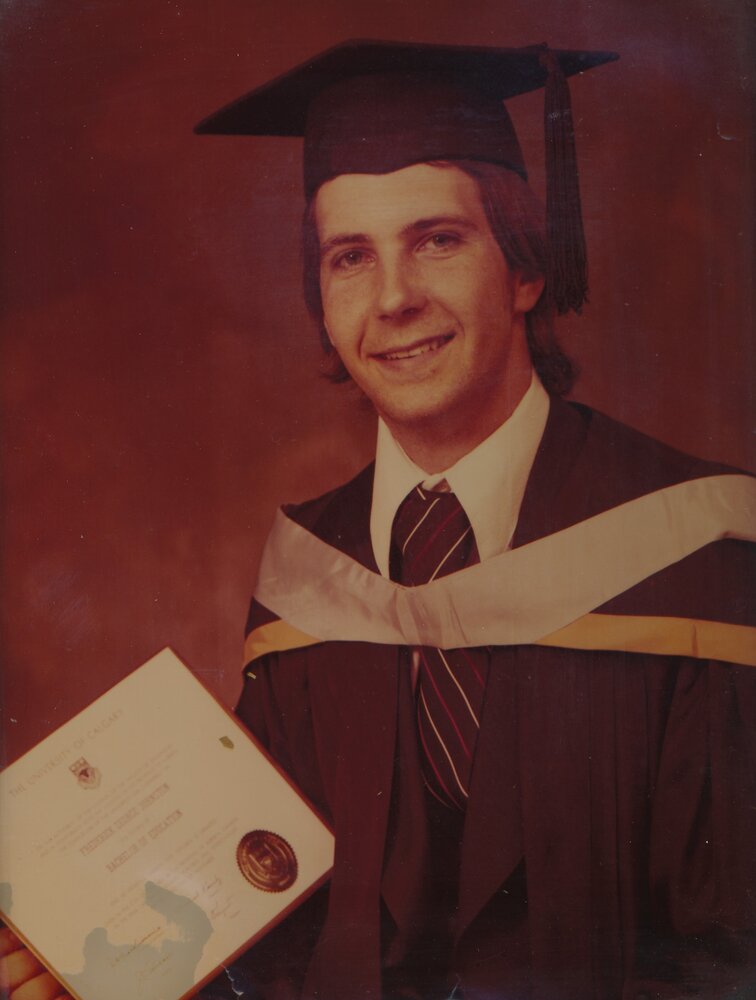 On Tuesday November 15,2022 the Johnston family unfortunately said goodbye to Frederick (Rick) George Johnston Jr. at the age of 66. Rick passed away peacefully at the Foothills Hospital. He was born in Montreal and moved to Calgary with his family in 1973. In November of 1978 Rick received his Bachelors of Education Degree from the University of Calgary. His biggest passion was music and he loved playing the drums. In 1978 he moved to Saskatoon to play drums for a band called Canadian Connection. Rick also played backup drums for Phyllis Diller.
After his short stay in Saskatoon, he ended up moving back to Calgary in the fall of 1979 to teach at Colonel Irving Jr High School. On March 23, 1980, while driving from Calgary to Vancouver, Rick was involved in a horrific accident that would forever change his life. His music career unfortunately ended as he wound up in a coma and was told that he’d never walk or talk again. He defied everything the doctors said and ended up getting over 40 more years with his family. On top of his love for music and the Beatles he also enjoyed bowling with his family, bingo with his mom and hockey (especially watching the Calgary Flames and Montreal Canadians). Even though the accident may have changed his mobility it never changed him. Rick was loving, caring and the most genuine individual you’d ever meet and he will be deeply and incredibly missed by many, many people.
Rick is predeceased by his mother Doris Johnston and his Father Frederick George Johnston Sr. Rick will be missed by his brothers Lindsay Johnston (Linda Johnston and her daughter Christine Andrew) and Glen Johnston (Joanne Johnston) of Edmonton; his sister Lee Johnston (Mark Baker); his nephews Christopher Johnston (Tannis Stenhouse and her son Chase & daughter Lily), Gary Johnston (Raeanne Johnston) of Peterborough, Ontario, and Kurt Johnston (Madisson Currie); and his nieces Jaime Brown (Neil Brown), Jennifer Smith (Greg Smith), Nicole Johnston, and Taylor Johnston-Baker. He will also be missed by his great nephews Sirani Brown, Kemar Brown, and Zackary Johnston; and great nieces Latavia Brown, Lillianna Curie-Johnston, Emily Currie-Johnston and Elora Smith. Rick will also be deeply missed by his dear and very close family friend Gigi Nicholson of Regina Saskatchewan.
Rick’s mother Doris passed away November 14, 2012 (almost exactly 10 years apart in their passing) but he is now reunited with her and his father once again.

Share Your Memory of
Rick
Upload Your Memory View All Memories
Be the first to upload a memory!
Share A Memory