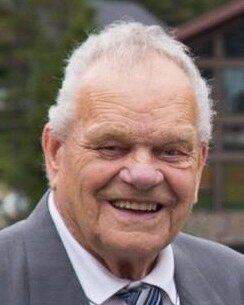 Gordon married Kathleen Christensen (Bales) on July 22, 1954. Together they had four daughters and one son. Gordon was very proud of Penny (Evan), Nancy (Terry), Joyce (Eugene), Marianne (Rod), and Dale (Tammy); thirteen grandchildren, eleven great-grandchildren, and one great-great-grandchild. He is also survived by four brothers, Norman, Leonard, Arthur, and Glen.

Gordon was predeceased by his parents Nis and Lydia; brothers Terry and Edward; great-grandson Boston; and daughter-in-law Tammy.

Gordon did many adventures in his life including road construction, logging, farming, auctioneering, home building, real estate, Town Councillor, and much more.

One of his proudest accomplishments was being awarded Volunteer of the Year for the Town of Alix when he was in his 80's.

Gordon was an honest kind gentle soul who will rejoice in the Glory of his Maker.

A funeral service will be held on Wednesday, November 30, 2022, at Strathmore United Church at 1:00 p.m. Interment and lunch to follow.

Share Your Memory of
Gordon
Upload Your Memory View All Memories
Be the first to upload a memory!
Share A Memory