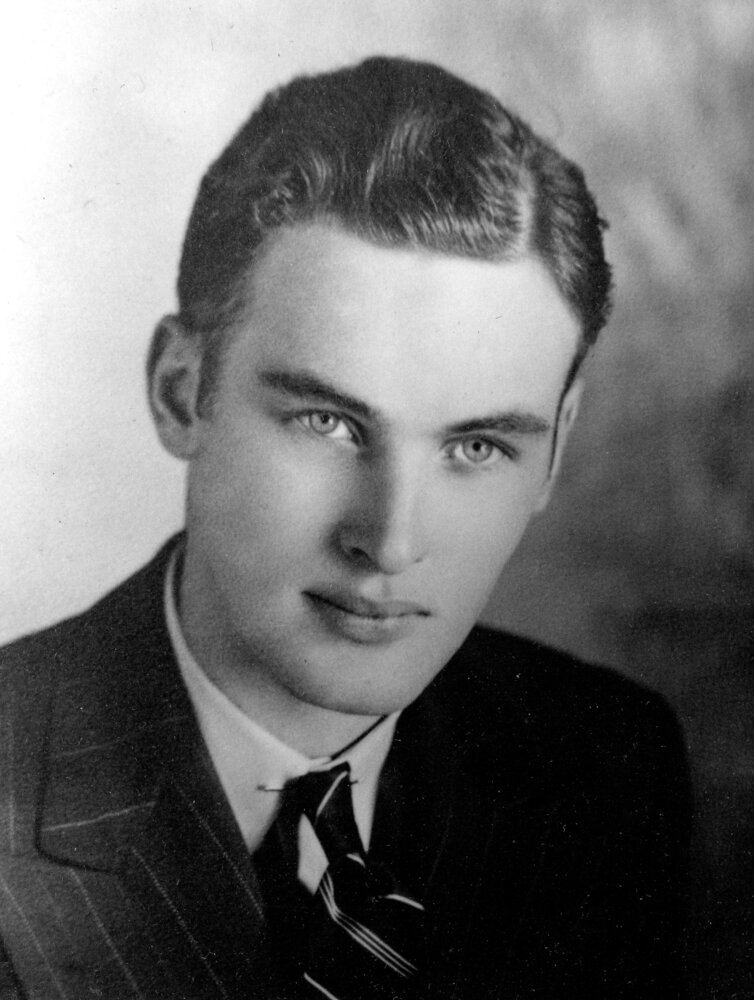 Clarence Robert (Cy) Putnam passed away peacefully in the early morning hours on January 19, 2023, at the AgeCare Sagewood facility in Strathmore, Alberta at the age of 99.

Cy was born on October 18, 1923 and was the first child of Robert and Marge Putnam.  He grew up on the family farm in Nightingale, which he later took over from his father.  As an infant, he and his parents spent the first winter living in a granary in the field as they were in the process of buying the farm and the preceding occupants were not going to leave until the following spring.  He attended Valley Garden School, a one room schoolhouse about a mile and a half from the farm, until grade 9.  Immediately after, he attended Olds College for two years, which gave him a high school education with an added agricultural focus. By the time he was 18, Canada was immersed in the Second World War. Cy signed up for the Air Force where it was recommended that the new recruits have their matriculation to be better prepared for the demanding academic portion of the training. This resulted in a two-month stint at Western Canada High School to upgrade.  After graduating as a Pilot Officer and receiving his Wings in Vulcan, he answered a call from the British Royal Navy. They were looking to train pilots to land on deck during deployment in the Pacific. He spent a year in Aberdeen, Scotland for training. A few lifelong friends were made during those years, and Cy enjoyed reliving the many fond and exciting memories of that time in his life.

Upon returning from overseas Cy returned to the family farm and married Helen Way on November 3rd, 1947.  Cy and Helen built a simple two room house on the property which over the years had many add-ons to accommodate a growing family.  They raised a total of six children. Besides raising a family and running a mixed farming operation, Cy was active in the communities of Nightingale and Rockyford. He coached hockey in Rockyford and was one of the key contributors to the construction of the new Nightingale Community Hall in 1969, as well as the publishing of the Nightingale history book in 1979.  In 2014 Cy and Helen were recognized for their lifelong contributions to the Nightingale community by being bestowed the honour of cutting the cake at Nightingale’s 100th Anniversary Celebration.

After the children had all grown up, Cy and Helen became avid world travellers. Together they had been to every continent except Africa and Antarctica. Some of the destinations they have travelled to include Australia, Russia, China, Indonesia, many European countries, South America and almost all North America.

Cy also enjoyed several hobbies throughout the years. He was rather social and loved to play cards. For many years, it was almost a nightly ritual for him to drive down to Ardenode after supper to play poker with a few buddies.  He and Helen hardly ever missed a card party which was a regular Friday night event at the Nightingale Hall. During the winter months, he often did woodworking out in the garage.  He built several pieces of furniture and shelving which are still in his home and the homes of his children today.  He was an avid reader of a variety of genres and also had a keen interest in politics and economics. After moving into Sagewood in 2019, he still took great pleasure with trips back out to the farm to be outside and around his cattle.

The family would like to express their gratitude to the staff and especially nurse Sandra at Sagewood for their care and compassion over the past three and a half years.

A service in memory of Cy will be held on Friday, February 10th, 2023 at Hope Community Covenant Church (Strathmore) at 1:00 p.m.  The service will also be live streamed.

In lieu of flowers memorial donations may be made to The Veteran Association Food Bank at  https://veteransassociationfoodbank.ca.

Share Your Memory of
Clarence
Upload Your Memory View All Memories
Be the first to upload a memory!
Share A Memory