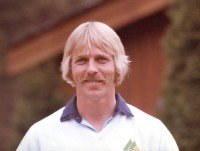 WHEELER, Brantford Kimberly It is with the deepest sadness that we announce the passing of our beloved Brant after a hard fought battle with cancer. He will be dearly missed by his wife Lotti, daughters Taryn (Shane) Millman, Jena (Francis) Praeker, and housemate Kristin. He is survived by his parents, Gene and Pat Wheeler; brothers Barry (Stacy), Calvin, Jim (Glenda); sisters Barb and Shelley (Tim); his in-laws Clarke VanHereweghe; Juli, Larry, Hayley, Spencer, and Carley Moon; Joni, Jim, Jason, and Jamie Hobson, as well as numerous nieces, nephews, uncles, aunts, and friends. Brant was predeceased by his brother Keri in 2005 and his mother-in-law Elsie in 2007. Brant always said that his biggest accomplishment in life was raising his two precious daughters who he was extremely proud of. All of his life his passion had been cars of any kind. He enjoyed driving them, polishing them, watching them, fixing them, and racing them. In his 56 years he owned over 25 different vehicles. His last purchase was a 67 Shelby 500 which he cherished. Some of his jobs included farming, road paving, U-Haul, Mobile Oil, Czar Resources, Husky, and Costal Hydropower Corp. Brant had a very colorful outlook on life with many adventures. He loved to visit and tell stories about the good old days with his brothers and friends. He will be deeply missed. A memorial service will be held on Tuesday, July 5, 2011 at Hope Community Covenant Church (245 Brent Blvd., Strathmore) at 2:00 p.m. In lieu of flowers please consider donating blood. To send condolences, please visit www.wheatlandfuneralhome.ca. WHEATLAND FUNERAL HOME LTD. (Strathmore) in care of arrangements. 403-934-5666 Send Condolences

Share Your Memory of
Brantford
Upload Your Memory View All Memories
Be the first to upload a memory!