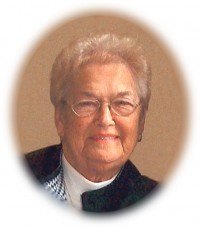 GUTTMAN, Eunice Bertha GUTTMAN, Eunice Bertha January 23, 1941 – June 18, 2011 It is with heavy hearts that we announce the passing of Eunice Guttman. Eunice passed away peacefully in Strathmore on June 18, 2011, surrounded by friends and family. Beloved wife of Louis Guttman, Eunice and Louis shared 31 years of marriage together. She will be forever remembered and dearly missed by her children, Ian (Cathy) of Edmonton; Debbie (Ken) of Grande Prairie; Janet (Jeff) of Strathmore; Don (Judy) of Tofield; and Donna (Randy) of Calgary. Eunice is also survived by her grandchildren, Chelsey; Maddison; Peggy (Jorgen); Grant (Jennifer); Jennifer; Joey (Tara); Jessie (Adam); Jason; Justin; Colton; Brett; Kyla; and Garrett; great-grandchildren, Katrina; Brenna; Lane; Mika; Levi; and Tiberius; brother Vern; sisters Madeline; Darlene; and Iris; and her long-time, dearest, friend, Merel Lickers, along with countless other friends who were blessed to know her. Eunice was predeceased by her parents, Jack and Hazel Taylor and her sister, Sherrley. Eunice touched the lives of many people with her smile and laugh. She maintained her sense of humour all the way to the end. A memorial service will be held on Wednesday, June 22, 2011 at Lord of All Lutheran Church (Strathmore) at 2:00 p.m. Donations in Eunice’s memory may be made directly to the Alberta Heart and Stroke Foundation (#200, 119-14 St. N.W., Calgary, T2N 1Z6). To send condolences, please visit www.wheatlandfuneralhome.ca. WHEATLAND FUNERAL HOME LTD. (Strathmore) in care of arrangements. 403-934-5666 Send Condolences

Share Your Memory of
Eunice
Upload Your Memory View All Memories
Be the first to upload a memory!