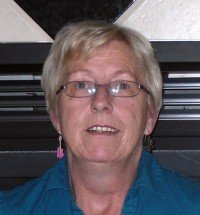 ECKENSWILLER (nee Hoffman), Sandra “Sandy” March 28, 1956 – May 27, 2011 It is with great sadness that we announce the passing of Sandy Eckenswiller of Strathmore after a short battle with cancer. Sandy was pre-deceased by her father Cecil Hoffman in September of 2010, and mother Norma Hoffman (nee Gutzki) in January of 1995. Sandy will be missed and lovingly remembered by her husband Joe Eckenswiller; her offspring Paul (Jennifer), Blair, and Crystal; sister Cheryl (Kevin) de Slegte; brother Allan (Karen) Hoffman; as well as numerous nieces, nephews, and fond friends. Sandy was born in Kitchener, Ontario and raised in Breslau, where she attended Breslau Public School and Grand River Collegiate. After high school she worked at Cornet Hotel and Electrohome. In 1973, she met her future husband, Joe, on a blind date. In 1975 they went out west to Alberta for a vacation and that is where they stayed. Joe and Sandy were married in Calgary in 1977 and lived in various places within Calgary. In 1980 they built a home in Irricana and in 1990 they moved to Strathmore to raise their family. Sandy loved the outdoors, whether it was camping or working in her flower gardens, tending to animals, and crocheting. Sandy will always be remembered for her willingness to help both friends and family and assisting with the care of her parents when they were ill. Sandy would always say she was just a phone call away! A memorial service will be held on Saturday, June 4, 2011 at Kingdom Hall of Jehovah’s Witnesses at 2:00 p.m. Luncheon to follow at the Strathmore Curling Rink. In lieu of flowers, memorial donations may be made directly to the Canadian Cancer Society (200, 325 Manning Rd. NE, Calgary, AB, T2E 2P5) To send condolences, please visit www.wheatlandfuneralhome.ca. WHEATLAND FUNERAL HOME LTD. (Strathmore) in care of arrangements. 403-934-5666 Send Condolences

Share Your Memory of
Sandra
Upload Your Memory View All Memories
Be the first to upload a memory!