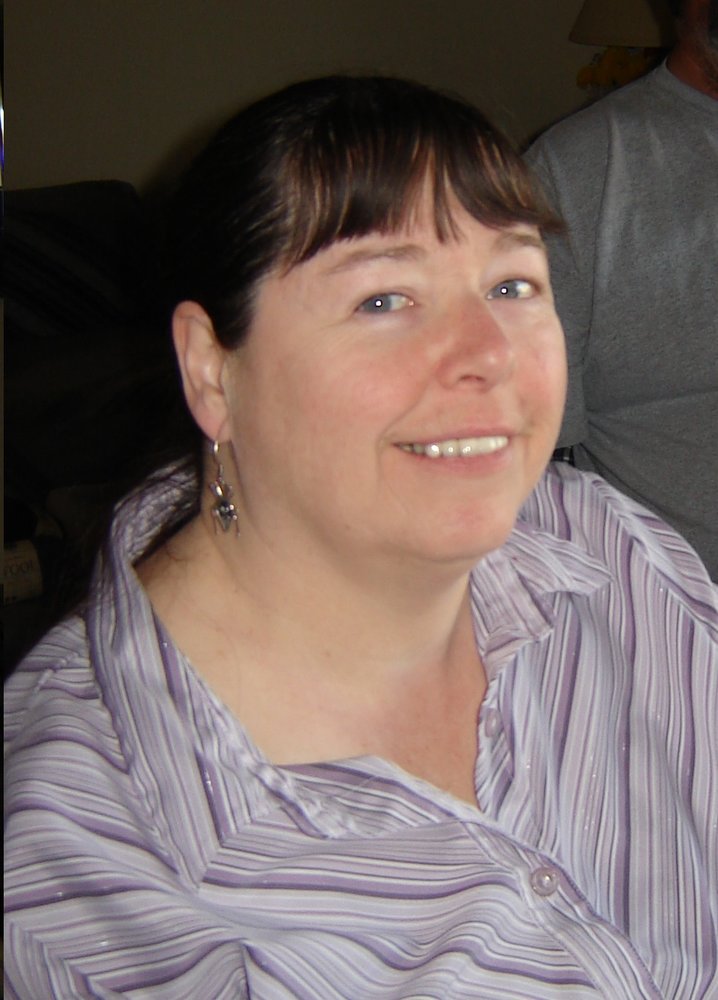 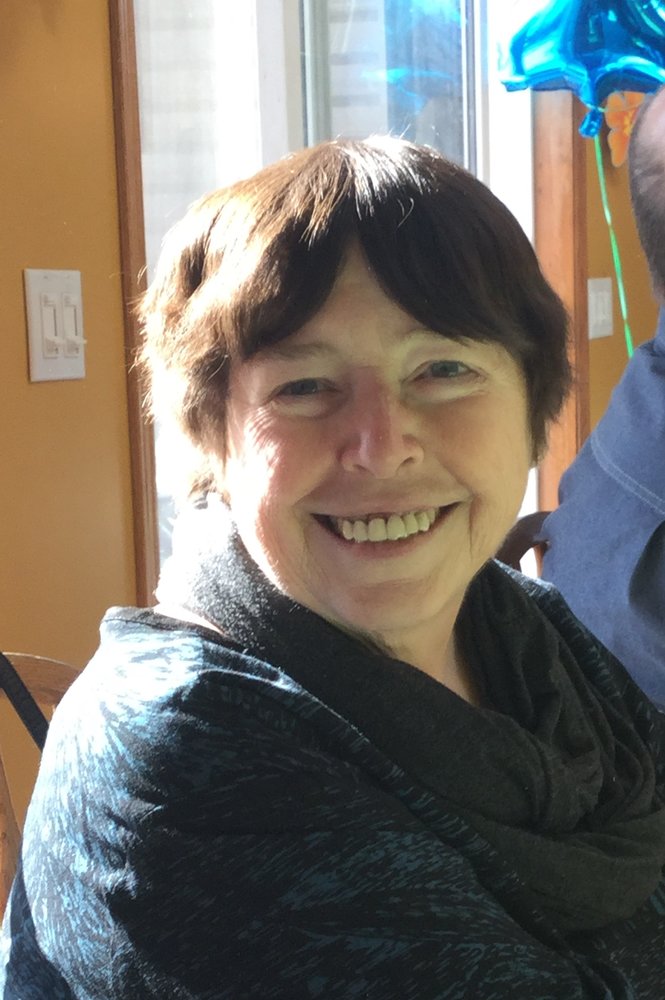 It is with a very heavy heart that we are announcing the passing of beloved mother, daughter, grandmother, sister, and wife, Linda Marie Nyeste.  She passed away peacefully surrounded by family and loved ones after a heroic 4+ year battle with Lymphoma (Cancer).  Her boisterous laugh and compassionate personality will be missed by everyone who had the pleasure of meeting her.

Linda was born in Edmonton to Jack and Marie Stadler, grew up in Altadore, Calgary, with her brother Larry, and attended Central Memorial High School, from which she graduated with honours.  In 1978, Linda married Frank DeVetten.  While they were building their first home in Redwood Meadows, he started a plumbing business and she worked at CIBC.  After a few years, and as their family was growing, they decided they wanted more land and bought an acreage in Priddis, where they built their dream house.  Within a month of moving in, their house burned down.  They lost all their possessions, but decided to rebuild.  After 10 months of hard work, and special consideration for fire-proofing, their third home was just about ready.  However, just as they began moving in, this home too, was destroyed by fire.  Linda was always grateful everybody escaped the house fires, but with two kids, she just didn’t want to take the chance and rebuild again.  After deciding to leave the property, Frank and Linda used a year of transition to recover and re-evaluate where to live.

In 1986 they decided to settle in Chestermere with their three children.  Chestermere became their home quickly, as they both became very involved in the community.  Frank began his plumbing business on the east side of Calgary, as Linda handled the phone calls and the books.  While their family grew to four children, their house became a centre for the community. People would stop over to borrow tools or see what Frank was up to, and while there, anyone was welcome to stop by the kitchen for a friendly smile, coffee or eggs.

Linda was a devoted stay-at-home mom and defined the “open home”.  Every day, Linda made a 30-cup coffee pot, which was shared with neighbours, friends and visitors.  Her kids, their friends and neighbourhood kids were often seen running around and playing on the acreage.  Linda wanted to meet more moms in the community, so she started a weekly playgroup in her home.  Moms brought their kids to play and socialize while the women shared life over coffee.  For almost 10 years, she planned and organized the children’s Halloween Party at the Chestermere complex, buying prizes and candy, hiring entertainment, and recruiting family and friends to work booths and ensure that community kids had a great and safe Halloween.

As her kids started school, she was president of the Home and School Association, planning events and hiring staff and teachers.  Linda always loved the theatre, so when Chestermere Amateur Theatre Society (CATS) began, she had to join.  She attended meetings, worked front of house and loved watching how lines on paper, thrift-store clothes, and scraps of building material became a magical evening for the community.  While in Chestermere, she and her children attended Chestermere Christian Fellowship, where she grew in her faith, served her community, and watched her children develop faiths of their own.

In 1994, Linda drove school bus for Conrich Elementary and Chestermere High, which introduced her to a whole different generation.  She loved the students and shared treats with them every Friday.  Her community involvement gained her many friends and experiences.  She established deep roots, and the area east of Calgary became her home.
After Frank and Linda divorced, Linda moved to Langdon.  Linda married Ian Nyeste in 1997.  She and Ian attended Langdon Community Church, and fell in love with Pastor Joe.  She began attending Bible study.  She said, “There is a difference between being a Christian and being on your knees”.  Her faith was real to her and she exercised it daily, reading the Bible and praying for all the concerns of loved ones.  She began each morning with prayer and she said grace before every dinner, regardless of who was in attendance.

Linda remained in the plumbing industry and, after working for a couple different plumbing companies, she found a home at Nu-Mun Contracting.  Her positive attitude and strong work ethic made her a great team member.  She enjoyed her work and was proud to work for a man with integrity.  She often remarked on the young men with whom she worked, caring about their lives and watching them grow into great plumbers, husbands and fathers.

Linda and Ian enjoyed travelling.  They went to Mexico many times, enjoying the food and difference in culture.  She began to learn Spanish, as she always loved languages.  She brought the whole family to California, Florida, and Mexico twice.  Multiple times a year, they went camping in their motorhome or travelling and visiting through B.C.  Linda would often make trips to Red Deer to meet with extended family from Edmonton, for lunch and a visit.

Linda, her daughter, and many church friends organized and attended crafting retreats.  It was on these retreats that she decided to try quilting.  She had always loved her grandmother’s quilts, but had no background before she began.  With the help of others, and much patience, she learned to make many items, including baby quilts and quilted duvet covers for her children when they got married.  Her creations will be treasured possessions for generations.  Linda also organized crafting days at the church, for people to come and make blankets for emergency victims, passed along via the Langdon Volunteer Fire Department.

About ten years ago, Linda began clogging in Strathmore.  She enjoyed the dancing and really loved the people.  Clogging introduced her to a new activity and, more importantly, a new community.  While learning to clog, she and Ian also began Round-Dancing weekly.   Eventually, Linda and Ian began square-dancing in Strathmore. Yet again, Linda fell in the love with the people and the square-dancing community, and she had to get involved. Four years ago, she became the president of the Wheatland Whirlers.

In June of 2015, Linda was diagnosed with lymphoma. She began treatments right away, and always remained positive. She used her situation to better the lives of others, making soup and delivering it to each of her children, drumming up conversation with others in waiting rooms, and making cookies for the nurses at the hospital. She took all her treatments in stride, and knew that God was on the journey with her.

Linda remained president of the Wheatland Whirlers during her illness, but shared the role with Ian. She and Ian continued to dance and assist where needed for the club. They enjoyed square-dancing so much that they began going to other clubs’ dances, as well as square-dancing camp outs around southern Alberta.

While charity, the community, and her interests were important to Linda, nothing was more important than her faith and her family. She reveled in family gatherings, always making the effort to attend any invite, and always poised with a camera in hand.  Her pride and joy were her four children and their families.  In 2018, Linda became a grandmother; first to Liliana, then to Marcus.  Her grandchildren brought her great joy during a trying period in her life, but she never passed up an opportunity to babysit.

She is predeceased by her father Jack Stadler, and survived by her husband Ian Nyeste, her mother Marie Stadler, her brother Larry Stadler (Glenda), her daughter Jennifer deVetten (Randal), her sons Neil DeVetten (Sarah), Eric de Vetten (Lindsay), Jeff DeVetten (Tara), two grandchildren Liliana and Marcus, as well as innumerable friends and family throughout Edmonton, Calgary, Chestermere, Langdon and Strathmore.  Linda was known throughout the community for her selfless devotion to helping others.  She was always giving back to her community, even while her strength was fading. Her faith was unshakable, her love was boundless, and because of that we know that she now resides with our Lord and Savior, Jesus Christ, where we will all see her again soon.  Although Linda is physically gone, her presence and impact will be felt for eternity.

Family and friends are invited to attend a celebration of life at the Indus Recreation Centre at 2:00 PM on Friday July 12th, 2019.

Linda’s family would like to thank everyone at the Foothills Medical Centre (specifically, the Alberta Blood and Marrow Transplant Services) as well as innumerable family, friends and community groups such as the Wheatland Whirlers for the amazing assistance and support that they provided in making the last 4 years as positive as possible.

In lieu of flowers or gifts, donations to the Leukemia & Lymphoma Society of Canada will be greatly appreciated with heartfelt thanks from the family.

Share Your Memory of
Linda
Upload Your Memory View All Memories
Be the first to upload a memory!